A thought-provoking article in the latest NYTimes Magazine criticizing the increasing corporatization of academia has been making waves: "Why we should fear University, Inc."

The author, Frederik deBoer, sounds a call of alarm about the "constantly expanding layer of university administrator jobs...," writing  "It's not unheard of for colleges now to employ more senior administrators than professors... This legion of bureaucrats enables a world of pitiless surveillance; no segment of campus life, no matter how small, does not have some administrator who worries about it... like Niketown or Disneyworld, your average college campus now leaves the distinct impression of a one-party state."

Is this a valid criticism of today's academic world?

A bloated administration has been one of the charges leveled against the Board and Administration of The Cooper Union for the Advancement of Science and Art (my alma mater), in a lawsuit by the Committee to Save Cooper Union (CSCU) that was recently settled through an intervention by the office of the NY State Attorney General. CSCU, supported by a large number of students, alumni, and faculty, argued that a failure to control this administrative bloat had led to years of increased spending at a university, pushing it for the first time in its history (since 1859) to charge tuition to most incoming students.

Others have quantified this trend and railed against it. An article by Jon Marcus from last year points out that since 1987, "the number of administrators and professional staff has more than doubled. That’s a rate of increase more than twice as fast as the growth in the number of students."

Another recent essay, by David Schultz, laments the role of administrators with a corporate mindset in creating increasingly more standardized curricula. Schultz writes: "traditional schools [are] adopting this model; employing business leaders to run schools and developing cost containment policies aimed mostly at standardizing curriculum.  It is top-down decision-making premised upon treating faculty no differently than an assembly line worker. If all of the curriculum is the same then it is possible to substitute one content instructor for another. The result: a market-driven product devoid of innovation, creativity, and intellectual challenge."

On the other side, to give a balanced perspective on this issue, it can be, and is argued by many, that the growing size of the administration and adoption of a corporate model in universities has itself been in response to several issues:
A report issued by the Delta Cost Project of the American Institutes of Research, authored by Donna Desrochers and Rita Kirshstein, titled "Labor Intensive or Labor Expensive? Changing Staffing and Compensation Patterns in Higher Education" provides a comprehensive quantification of the changes and provides a perhaps more moderate perspective on them, concluding that while the higher education workforce grew in the 2000's, this was largely to compensate for increasing enrollments: " By 2012, public research universities and community colleges employed 16 fewer staff per 1,000 full-time equivalent (FTE) students compared with 2000, while the number of staff per student at public master’s and bachelor’s colleges remained unchanged".

For all these reasons, I don't see this trend towards increased administrator hiring on campuses being halted or reversed dramatically anytime soon, nor am I sure there is merit in a blanket protest against this trend on principle alone given the many extraneous, environmental factors that may be contributing to it. In reflecting on my own experiences, I can see the genuine value and improvements that hiring a cadre of professional and capable administrators can bring in service of both students and faculty.

At the same time, I think deBoer and Schultz are right in bringing the growth in numbers of administrative staff to our attention and in calling for greater awareness of their impact on every aspect of campus life, both inside and outside the classroom.

On social media, I also saw someone share the following comment on deBoer's essay (included here with apologies for incomplete/insufficient attribution --- I couldn't determine the identity of the original writer): 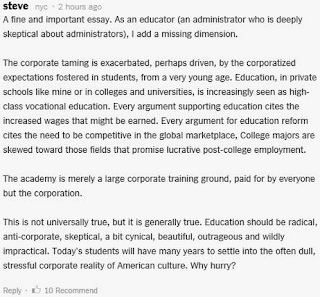 In an age when technology is pervasive, and driving dramatic changes in the economy, when names like Steve Jobs, Mark Zuckerberg and Elon Musk seem to be foremost on everyone's lips (not Ramanujan, Einstein or Feynman, let alone Picasso, Camus or Tagore (quick! Can you name six currently active artists, writers, scientists, mathematicians, or other intellectuals that are today's equivalent of these figures?) ), when there is a growing sense that income disparities are growing and that job security is a thing of the past, and when the rising costs of education are resulting in greater student debt than in the past, it is not surprising to me that students are flocking to professional schools and programs that emphasize lucrative employment, and that the view of a liberal, radical, wildly-impractical, education is considered old-fashioned and so pointless that even tenured faculty in such fields are dropping out.

At any rate, I'm not sure if those of us who teach engineering can ever avoid the charge of being pro-corporate and overly focused on vocational training. Indeed, our own internal discussions often suggest to us that if anything we perhaps need to do even more to prepare our students to be successful in industry. But it is worth pondering, continually, whether we are maintaining a good balance between training and education, practice and theory, between what our students want and what they need...


Really great post, Thank you for sharing this knowledge. Excellently written article, if only all bloggers offered the same level of content as you, the internet would be a much better place. Please keep it up!..

All Online Assignment help is a web portal where students get help in making assignments for all the subjects, with the help of our experts. You will get 100% plagiarism free assignment. Expert’s consultation is also available for students. If they have any query they can contact with our experts anytime.

Are you worried about how to complete the college assignment and how brought good marks in college, then our best assignment helper are available to give you cheap rate assignment facility.

Packers and Movers in Hyderabad said...

Movers and Packers in Mumbai said...

I this article you shared the info to the graduate students. It is the best way to deal with tap the important depictions of someone lives. I welcome that someone creates this click here for info and it is so valuable for the overall public.

Yeah i am agree the fact that the content is something that make your profile more successful so always focus on what you are posting. Also read this post and get what you are looking for.

I can read bets articles on this site and have learned useful tips. It is also motivating students to go confidently with more values and tools

this panda shop is so interesting as well as so much fun to visit . I always am able to see some very exciting things in it. keep sharing explore the details and entertaining us with your blog posts

Many of my colleagues at essay review service have kids I will show them your web page so that they can ERAS application enjoy a family time.

AllAssignmentHelp reviews Assignmentservicerating is best reviews site.We at Top Quality Assignment believe that there is no shortcut to success and to attain success, hard work, dedication, and commitment must be present. We are an online platform where students check & write reviews for assignments related websites.

That blog was amazing, I am impressed with your thoughts. I got the best information from this site, It’s very useful to all and us. Thanks for sharing this post.
dentistry in Latvia

At getassignmenthelponline.comwe provide you the best and effective essay writing service. We help the seeking student according to their flexibility. Best Essay Writing Service