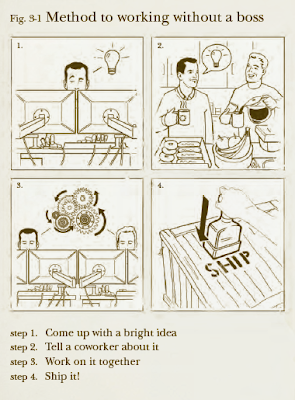 An illustration from the Handbook


Recently, someone leaked Valve's handbook for new employees. It's a remarkable introduction to what is clearly an exceptional place to work.

Valve, in case you haven't heard of it, is a game software company known for highly popular products such as Portal, Steam.

Here are some excerpts from this thought-provoking document.

On why Valve is a flat company:


... when you’re an entertainment company that’s spent the last decade going out of its way to recruit the most intelligent, innovative, talented people on Earth, telling them to sit at a desk and do what they’re told obliterates 99 percent of their value.

We want innovators, and that means maintaining an environment where they’ll flourish. That’s why Valve is flat. It’s our shorthand way of saying that we don’t have any management, and nobody “reports to” anybody else.

On how self-directed individuals organize to work together (see illustration above):


We’ve heard that other companies have people allocate a percentage of their time to self-directed projects. At Valve, that percentage is 100.

Since Valve is flat, people don’t join projects because they’re told to. Instead, you’ll decide what to work on after asking yourself the right questions (more on that later). Employees vote on projects with their feet (or desk wheels). Strong projects are ones in which people can see demonstrated value; they staff up easily. This means there are any number of internal recruiting efforts constantly under way.

(Yes, apparently they really do have desks with wheels that allow them to move around to physically different locations depending on the project and the group they are working with.)

Questions employees are asked to consider when deciding on what to work on:


• Of all the projects currently under way, what’s the most valuable thing I can be working on?
• Which project will have the highest direct impact on our customers? How much will the work I ship benefit them?
• Is Valve not doing something that it should be doing?
• What’s interesting? What’s rewarding? What leverages my individual strengths the most?


While people occasionally choose to push themselves to work some extra hours at times when something big is going out the door, for the most part working overtime for extended periods indicates a fundamental failure in planning or communication. If this happens at Valve, it’s a sign that something needs to be reevaluated and corrected. If you’re looking around wondering why people aren’t in “crunch mode,” the answer’s pretty simple. The thing we work hardest at is hiring good people, so we want them to stick around and have a good balance between work and family and the rest of the important stuff in life.

And there's a lot more! The handbook discusses everything from the importance of hiring and what they look for when hiring new recruits to how they evaluate each other's work and value to the company. Read it for yourself.  For additional reading, there is Michael Abrash's blog post on "Valve: how I got here, what it's like, and what I'm doing".

While I've heard of other small creative companies that provide a great deal of freedom and hierarchy-free operation (for example, IDEO), Valve is clearly an extreme example of this kind of company, and an extremely successful one at that.

It occurred to me when reading this handbook that this kind of creativity-enabling autonomy is precisely why many academics love their job.  There is a remarkable degree of similarity between the way Valve operates and the way a top academic department operates. There is a lot of effort put in to hire the very best possible individuals as tenure-track faculty. But once they are hired, faculty have complete autonomy on what to work on, how to work on it, how much funding to get, and where to get it from, who to collaborate with, how to balance their work and life (though arguably, during the years on the tenure track this can be a bit skewed). There is also an internal peer review process which provides faculty with an incentive to stay productive and contribute in their own way to the mission of the department. (It's a pity we don't have massage rooms!).

How can we all take inspiration from Valve to change our work environments to be even more flat and autonomy-encouraging? What would it take to change the prevailing paradigm so more companies are operated this way?

I would of course wish for all my students that they could find for themselves a job that offers this degree of autonomy and opportunity for self-realization through passionate engagement. But I also wonder: are they all ready for such a place? Would they all have the self-confidence, the proactive, entrepreneurial attitude, the service orientation, the passion, the self-drive, and the grit to get and succeed in such a job?

Indeed, a central question of this blog, one I have been probing in many of my posts, is this: what do we need to change about our current system of education at all levels so that it aids in the development of more individuals capable of creating and excelling in self-directed environments?

**
For more on Valve, check out this informative video:
http://www.onlinemba.com/blog/what-every-company-can-learn-from-valves-employee-handbook/

This summarizes so many of my recent discussions over the job market for highly skilled and creative individuals. I find it stunning that most work environments expect 50 to 60 hour weeks out of their engineers. Unfortunately, it is hard to quantify creative worker output - I have been unable to find basic research on productivity versus workload for this class of employees. I believe I am a very creative, skilled employee. But on average I can only carry out good work of this sort for perhaps 2 or 3 hours at a run. That means a max of six hours a day.

Friends then argue that you pack the additional 4-6 hours with mindless work. I ask why mindless work is required of me - why I cannot recharge, get some exercise, and feed my body well.

I wonder whether even the mindless work should be carried out so long after mental depletion. I strongly suspect that managers (being human) cannot wrap their brain around the long-odds costs of such hours. Example: employees removed bolts from the base of the NOAA-N satellite because they were needed for another satellite transfer. Such actions were supposed to be documented, the employee forgot. The next day, an attempt to move the satellite resulted in it falling over. Net repair costs: $135 million. Who would like to bet the employee was fatigued? Working long hours to get a task done? One that should have been allocated more staff instead (working healthier hours).

As I interview right now, I am surprised by the push-back by employers when I suggest that I am interested in 40 hour work weeks. I accept and am fully OK with bursting above that for short periods. But I get the impression that "handles short deadlines" is code for "handles a never-ending precession of short deadlines, frequently works 60 hour weeks". No thank you.

Good points. For more on work-life balance, including some pointers to research about it, check out this article by Sara Robinson, titled Why We Have to Go Back to a 40-Hour Work Week to Keep Our Sanity In particular, it cites Evan Robinson's white paper for the gaming industry (the two are related): Why Crunch Modes Doesn't Work: Six Lessons

For myself as an academic, I agree that it's hard to think or work creatively or learn and teach for more than 6 hours a day most days. But there are still many, many necessary but perhaps less creative tasks like filing expenses, reviewing and editorial duties, writing recommendation letters, meetings for service committees, administrative meetings, meetings with visitors, that can fill up several hours each day. And the more of these there are, the less creative work gets done...