Teach no thing (but rather, how to think about things) 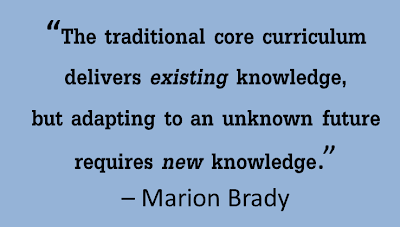 Marion Brady is a history teacher who advocates teaching students not merely facts, or "content", but rather how to think.

Long before corporate America began its assault on public schooling, American education was in trouble. Educators were, however, increasingly aware of the problems and were working on them. When Bill Gates, Jeb Bush, Mike Bloomberg, Arne Duncan, Michelle Rhee, and other big name non-educators took over, that worked stopped.

What I want people to understand is that the backbone of education — the familiar math-science-language arts-social studies “core curriculum” — is deeply, fundamentally flawed. No matter the reform initiative, there won’t be significant improvement in American education until curricular problems are understood, admitted, addressed, and solved.


His analysis of the crisis in education that we face today at all levels is that "The traditional core curriculum delivers existing knowledge, but adapting to an unknown future requires new knowledge. Obviously, what will need to be known in the future isn’t yet known, from which it follows that it can’t be taught. However, the process by means of which new knowledge is created can be taught."

Going beyond rhetoric, Brady has put together a non-content-based curriculum called "Connections: Investigating Reality" that attempts to teach middle school and high school students, or rather, help them teach themselves, how to identify patterns, how to extract meaning from texts and the world around them, how to reason and organize their thoughts.

I could not agree more with his ideas.

I myself experienced the importance of learning how to think when I took a introductory course on analysis in the mathematics department at Cornell. Though the material that this course was ostensibly about was reasonably familiar to me: real numbers, limits, sequences, etc., what the course was really about was how to prove things, how to express mathematical ideas precisely, rigorously, cleanly. It was about how to logically layer arguments, building only upon what is already known, to come to a certain conclusion. I know that the way I thought about things, not only related to mathematics, but about all manner of things in the world around me --- economics, politics, human relations, even literature --- changed very substantially after taking that course. For the first time in my life, I felt confidence that when I constructed a logical argument carefully from a set of premises, it would not be flawed, and that, given time, I could spot a faulty argument when I came across one. Without this confidence, I would never have made it through the Ph.D., to a faculty position, and past tenure.

Now, I try to make sure that all the Ph.D. students I advise take the equivalent course at USC (Math 425a, if you are curious). And from my experience over the years, by comparing my impressions of them before and after they took the course, I can vouchsafe that nearly all these students dramatically improved their ability to think rigorously because of it.  (Interestingly though, I find, this appears to happen not during or immediately after the course, but a few months afterwards, as though it needed some time after that course for their neurons to make all the connections, during which perhaps their subconscious was hard at work applying what they had learned to various problems.)

Some colleagues and I were having a dinner tonight, downtown, at the somewhat quiet but always enjoyable Thai restaurant downtown --- Soi 7. Our conversation turned to educational philosophy.

A senior colleague mentioned that he too believes that what is important in a classroom is not merely conveying the lecture material, or even showing students how to solve a particular set of exercises after having them read or watch the material on their own (as is done in the increasingly popular flipped classroom model of teaching), but rather get them to think in class collaboratively, de novo, about the concepts and problems that the material is about before leaving the students to master the content and do exercises on their own. This way the emphasis is on fresh, critical thinking, rather than on content and drilling. He jokingly called it the "re-flipped" classroom.

Another colleague of mine at the table then indicated that this is very reminiscent of the famous "Moore Method" of teaching mathematics. This method, referred to as discovery learning, was developed by Professor Robert Lee Moore, who encouraged and guided his students at UT Austin to build on basic axioms and prove everything on their own, with minimal hints and without recourse to a text.

I feel inspired to think through the implications of such non-content-based learning of critical thinking and problem solving skills as well as discovery learning techniques, and plan to experiment with them in my own courses in the future.
Posted by Bhaskar at 1:30 AM

More thinking power is needed for more unknown knowledge. We are practicing the existing knowledge that's why we can not use our thinking power fully. We have to figure out new data and knowledge for our future.

Packers and Movers in Hyderabad said...

Movers and Packers in Mumbai said...

A very high level post with a knowledgeable information .thanks you for giving me such a nice information. If you need any college level Assignment Help at reliable quality with better work. Kindly visit Ideal assignment help.

You need not worry about the authenticity of these online websites which provide help to students. Just choose wisely. We have jotted down some problems which students face, due to which they move towards taking Assignment Help online.

A little more of research could have strengthened the paper even further. However, worry no more, as the experts at myassignmenthelpau.com are here to offer you necessary Assignment Help Luton guidance with assignments of all types including thesis, essay, dissertation and more.